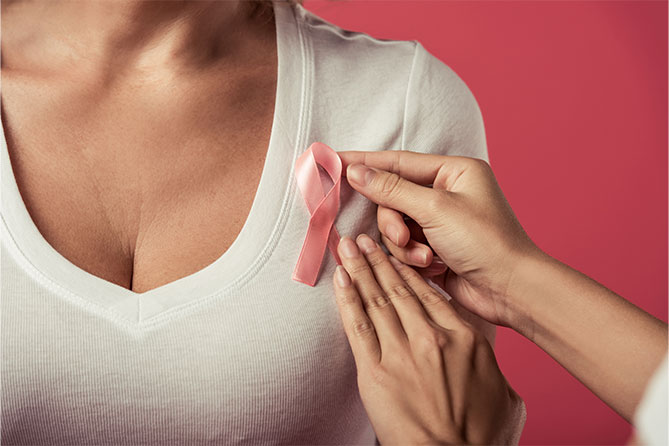 Cancer is never a fun word to throw around. However, we are living in a time of rigorous research and scientific progress. We not only want to warn you of signs that you might have breast cancer, but it is also important to make you aware of all the ways you can prevent breast cancer now!

It’s not clear exactly when or how breast cancer begins. We do know that the journey from normal cells to cancerous ones involves several steps, with many opportunities for things to go wrong along the way. Breast cancer is more likely as you get older – the vast majority of cases occur in women over 50 years old. Your risk increases as you age because DNA damage accumulates over time and gives cells more opportunities to develop into cancer. A family history of breast cancer – If you have a close relative (mother, sister or daughter) who has been diagnosed with breast cancer, your own risk goes up by about two-fold compared to someone without this history.

Women with certain genetic mutations – these include changes to the BRCA1 and BRCA2 genes, which are involved in repairing damaged DNA - have up to an 80% chance of developing breast cancer at some point during their lives.

Obesity has been linked with an increased risk of both pre-menopausal and post-menopausal breast cancers. A new study suggests that excess fat tissue in the breasts maybe to blame. The study, published in the journal Breast Cancer Research and Treatment, found that obese women were more likely to have higher levels of a certain type of cell in their breast tissue. These cells are known to promote the growth of cancerous tumors. Previous research has shown that obesity can increase the risk of breast cancer by up to 50%. This is thought to be due to the fact that obese women have higher levels of estrogen, which can fuel tumor growth. However, this new study suggests that it is not just the presence of excess estrogen that makes obese women more susceptible to developing breast cancer. The researchers believe that fat cells themselves may play a role in promoting tumor growth. Fat cells produce a number of different hormones and other substances that can influence the development and growth of cancerous tumors. For example, they release a hormone called leptin, which has been shown to stimulate tumor growth in laboratory studies. In addition, fat cells also produce substances known as cytokines, which can promote inflammation throughout the body. This chronic inflammation is another known risk factor for cancer development.

Alcohol consumption – Drinking alcohol raises levels of circulating estrogens in your body, which may fuel tumor growth. Alcohol is a carcinogen, which means that it can damage DNA and promote the development of cancer cells. In addition, alcohol consumption can increase the level of inflammation in the body, and chronic inflammation is also linked to an increased risk of breast cancer. There are several mechanisms by which alcohol consumption can cause breast cancer. First, as mentioned above, alcohol is a carcinogen and can directly damage DNA. This damage can lead to the development of cancerous cells. Second, drinking alcohol increases levels of estrogen in the body. Estrogen is a hormone that promotes cell growth, and high levels of estrogen are associated with an increased risk of breast cancer. Finally, chronic inflammation is another factor that may contribute to the development of breast cancer. Inflammation is a natural process that helps our bodies heal from injuries or infections; however, chronic inflammation can actually promote tumor growth and metastasis (the spread of cancer).

Exposure to certain chemicals and pollutants –there’s evidence that exposure to substances like benzene, polycyclic aromatic hydrocarbons (PAHs)and formaldehyde may slightly increase your risk. Taking hormone replacement therapy (HRT) containing estrogen and progesterone after menopause also slightly raises the odds, although this depends on how long HRT is used for.

So, what can you do to prevent breast cancer? Some factors, like family history, are out of our control. But there are lifestyle choices we can make that make a big difference. Here are some tips for how to lower your risk: